Did you know that City Council has deemed June Reentry Month in Philadelphia? Last month was the second year the city honored individuals returning home from incarceration and working to rebuild their lives and communities.  Here at Broad Street, we just couldn’t wait, and have been celebrating these transformations all Spring long.

In May we were thrilled to host a two-day Women in Reentry Event, including an art exhibit and reception featuring collaborative works from the People’s Paper Co-Op, followed by a speak-out at City Hall and a symposium celebrating the success stories of formerly incarcerated women. More than 150 people attended the events, while the empowering banners of artwork were left up for our guests to enjoy throughout the week. 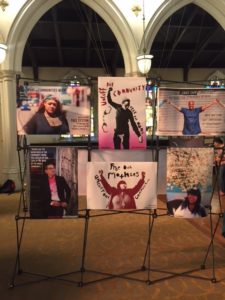 Recognizing that providing effective reentry support sometimes means preentry support for those awaiting trial, Broad Street Ministry has also been thrilled to partner with the Philadelphia Community Bail Fund. This volunteer-run organization made national headlines in 2017 with a series of high-profile bail outs for individuals, including its now annual campaign seeking to reunite Black mothers and caregivers with their families in time for Mother’s Day. This year roughly 30% of the women bailed out for Mother’s Day were BSM guests, and we were honored to host the Welcome Home dinner that the Bail Fund had organized for the women and their families.

On June 19 we hosted our second on-site recruitment event with First Step Staffing, a new entrant to Philadelphia, who is turning the temporary employment market on its head by putting recently homeless and incarcerated individuals at the front of the line for jobs. Nearly a dozen individuals were hired for temp-to-perm positions that day alone!