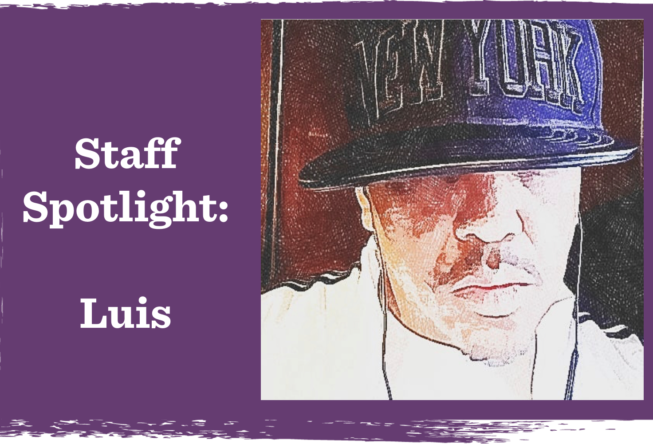 The artist known as @the_mad_artist_chunky_papi on Instagram goes by many names, but here at Broad Street, we call him Luis, our newest de-escalation specialist. Luis has been an artist since he was a kid, when a teacher singled him out as an art prodigy and recommended him for a scholarship at New York’s prestigious School of the Performing Arts. Luis got the scholarship, but he felt out of place around the “rich white kids,” at the school. He was much more comfortable creating political street art.

Luis was at the center of New York’s 1980’s art revolution. He wanted to make art that was accessible to the people he knew, not shut up in a gallery or a museum where they didn’t feel welcome. “Art,” says Luis “gave me an identity.” It was in prison, however that Luis realized that art doesn’t just transform individuals, it also transforms society. Luis gathered a hand-picked group of 17 inmate artists in the Philadelphia prison system, and connected them to Jane Golden, who would become the founder of the Mural Arts Program. Together, they created the first art-based restorative justice program in Philadelphia.

Members of the all-inmate crew worked with a group of crime victims in the city to participate in a year of meetings, healing discussions and planning that ultimately resulted in the Healing Walls mural project at 10th and Indiana. The experience was documented in the film Steel, Concrete and Paint.

Now Luis works as an independent artist, and continues his devotion to building a better world through his connection with Broad Street’s guests. If you catch him in the MPR, say hi and ask to see some of the amazing photos of his work!