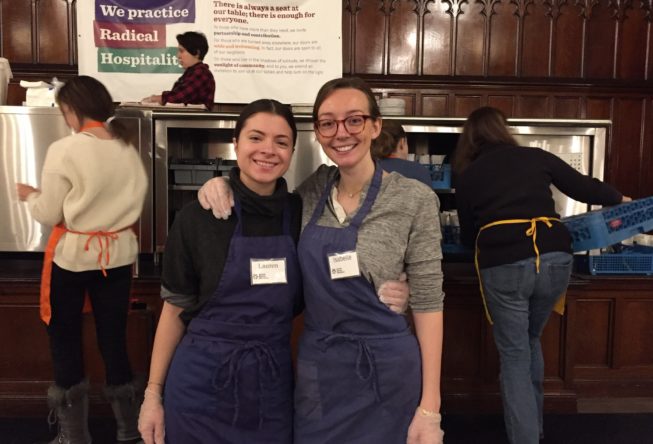 Every once in a while Broad Street Ministry is gifted with a double-dose of volunteer-awesomeness. In recent months, Isabelle and Lauren have joined the ranks of our regular volunteers, familiarizing themselves with the numerous services BSM offers. As best friends, they wanted to find someplace to do some meaningful volunteering together. “[Lauren] had been to BSM years ago, and suggested we go back. It was coincidental, but it has provided such a community that keeps pulling us back in new and sometimes hilarious ways”, says Isabelle. Lauren attended the William Penn Charter High School, where service learning was a large part of our curriculum. “I had always remembered Broad Street Ministry out of all of the other partnerships, as a result of the memories I had during service trips.”

Lauren and Isabelle’s friendship started in the first grade, when Isabelle was Lauren’s math tutor. Since then, they’ve been true partners, taking on new adventures together such as scuba diving on a catamaran for the summer. “I think the fact that serving the meals requires a partner was the first sign of fate and our love of the organization”, says Lauren. They keep coming back to BSM for numerous reasons. “From the staff to the volunteers to the guests, I’ve been so impressed by the openness and light within this community. It just puts me in the best mood and makes me feel really connected to all different types of humans in the most genuine way”, says Isabelle. Lauren also loves this community, remarking on “the feeling of walking into the space, instantaneously greeted by warm smiles, bursting energy, the peaceful atmosphere, and finally, the love that seeps out of every corner of the building!”

As regular volunteers, Isabelle and Lauren have formed great bonds with our guest community. Lauren reflects on the first time she volunteered at 315 Threadz. “I met David on the first
day of my shift at 315 Threadz. I quickly went over to him and asked what he needed, and how he was doing that day. I remember the first thing he said to me was that he was not great, through teary eyes. For the next hour or so, as we were shopping in the clothing closet, he shared the most beautiful story about his late Fiancee, the story of how they met and how he proposed on the Moshulu Dinner Boat. Their favorite spot had been Penns Landing, and they would take a long walk there down South Street while popping into shops along the way. He had reserved a private room for her on the boat, and ordered her favorite dish of Shrimp Scampi. All of the crew was aware of the event, and they even played her favorite song. His story of their love and connections overwhelmed me with unexpected emotion! His warm and loving energy was contagious, and from that moment on we were close friends. I enjoy every story that David shares, and although it is bittersweet, I am so excited for his plans to move to California in April. He is a kind, gentle, and wonderful human and I always look forward to seeing him at Breaking Bread!” Isabelle also finds closeness with the guests. In a recent hug goodbye with a guest, he said, “See y’all later. I’m going to my grandma’s house!” Isabelle says “It’s like the least exceptional story, but Lauren and I looked at each other and realized we actually connect with him (and so many others) in a comfortable way that we could really have never anticipated. In that moment, we were just friends saying “see you soon!” and there’s something really special in the complete normalcy of it all.”

We are so grateful that Isabelle and Lauren have made their way through our big red doors. As everyone who makes their way through BSM, Lauren and Isabelle are on a journey. Isabelle has a dream of scuba diving the Red Sea someday, and Lauren is now in the pre-health post bac at Penn, with a goal of becoming a physician and leader in women’s mental health. In sum, we are so grateful that they have found their way to practicing radical hospitality.